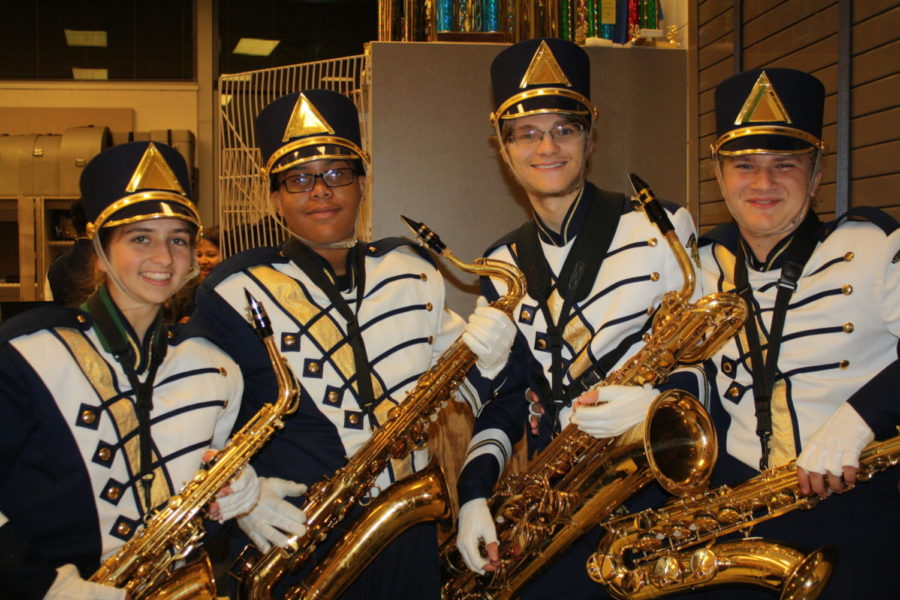 Saxophones get ready before marching onto the field.

On Saturday October 13, 2018, eighteen bands from across Virginia gathered at Midlothian High School to perform at the 13th annual Showcase of the Bands, hosted by the Trojan Marching Band. Hosting the event prevented Midlo from competing against the other bands, but they performed last as an exhibition. Park View High School marched effortlessly onto the field to the beat of their drum line to open the night.

Each band brought creative and complex shows to the table with show themes which varied from a wedding to a circus to a war battle that stunned the audience with the use of fire. Each marching band eagerly huddled together, watching their competitors perform. Three judges observed from the track, scoring each band, the highest score being a superior rating of one.

Midlo, a 5A band, performed last as the showcase band, presenting their show called True Colors. The theme of this year’s show featured music from the Trolls soundtrack, moving from a colorless to a colorful mood. A melancholy flute solo opened the show. As it progressed, the ensemble joined, adding to the somber mood. A few minutes into the show, the color guard changed their outfits from grey to red and waved vibrant flags, making the field burst into color, as the music changed to a more lively spirit.

In the end, Atlee High School marched away with the victory. Sophomore Casey Williams stated,”I liked performing and the team bonding with the color guard.” The student volunteers made the Showcase of the Bands successful by manning the concession stand, leading the bands from other schools, and cleaning up the stadium. Sophomore Savannah Stone explained, “I like how we all came together to make the event happen.”

In the final weeks of the marching band season, Midlo hopes to kick their rehearsals into high gear, adding even more props and elements to the show. Band Director Gordon Rawls explained, “Our goal moving forward is to get a unified pulse.” Their next competition takes place next Saturday, October 20, at Todd Stadium in Newport News.