A Royal Win at the Homecoming Pep Rally 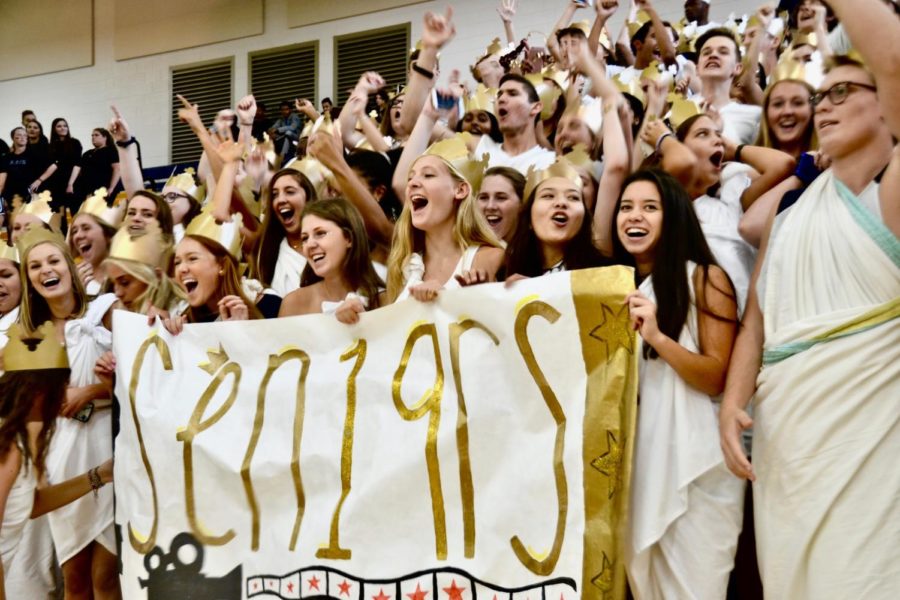 On Friday, October 5, 2018, Midlo’s students, decked out in their designated colors emerged, into the Midlothian High School gym to attend the 2018 Homecoming Pep Rally. A mix of pink and purple freshmen blended on one side, a pop of bright, red sophomores took the other side, and a cloud of darkness from the juniors in black piled in on another side. As the underclassmen anxiously waited for the pep rally to begin, the seniors stampeded into the gym with their white togas tied tightly and golden crowns adorned on their heads, proving their superiority and high status at Midlo.

To celebrate homecoming, Midlo’s Trojanettes teamed up with Midlo’s football team to perform a dance routine that brought everyone to their feet. Later, the Trojanettes made their way across the floor yet again for another impressive dance routine. The pep rally continued with games of tug-of-war and dodge ball between the classes and faculty. The games left everyone at the edge of their seats, but the seniors dominate both games to claim victory. Seniors also won the Coin Wars, which raised over $600 for Breast Cancer Awareness. Drawing from a seemingly endless supply of enthusiasm, the classes tried to outcheer each other during Midlo’s famous victory cheer by screaming V-I-C-T-O-R-Y louder than one another. As a final stamp to the event, judges announced the seniors as the winners of the Homecoming Pep Rally.

Earned based on their spirit and effort, the seniors proudly held the spirit stick for their 1st place win in the pep rally. The juniors placed 2nd place, while sophomores earned 3rd, and freshmen took 4th place. Undeniably, all grade levels showed their Midlo spirit through bold posters, creative costumes,  and ear-piercing screams, rivaled only by  the Midlo Pep Band. The 2018 Homecoming Pep Rally did not disappoint, as it proved an exhilarating and legendary event. Happy Homecoming, Midlo!