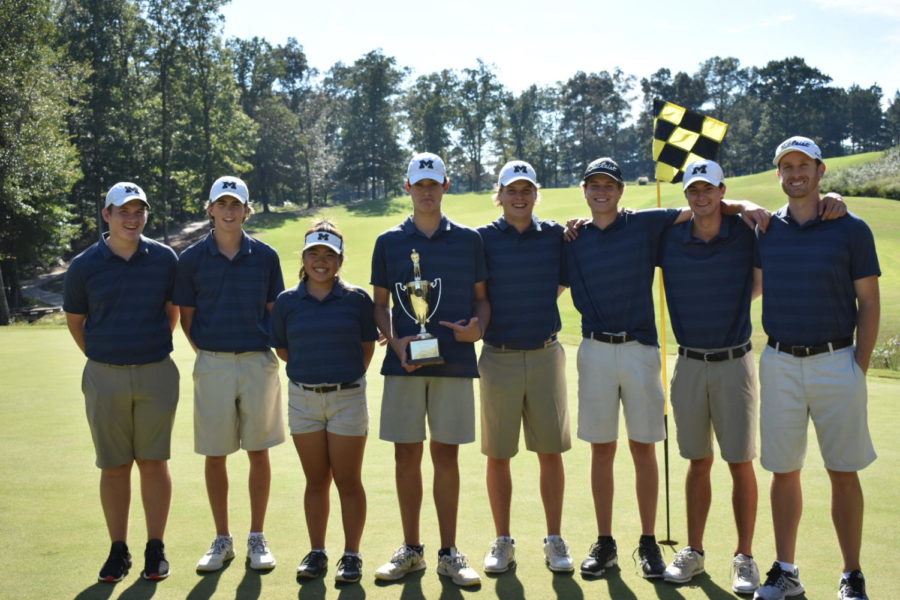 Midlo golf triumphantly celebrates their win in the Regional Tournament.

On October 2, 2018, Midlo Golf competed in the Regional Tournament at Mattaponi Springs Golf Course and earned the title of Regional Champs for the second year in a row. Under the leadership of Coach John Pruitt, Midlo came out on top with a score of 298; Monacan’s score was 320. Both Midlo and Monacan will advance to compete for the State title in the next week.

Each school, including Midlo, sent their top six golfers to compete, with the top four scores counting towards the total. Midlo’s leaders included: senior lead scorer Henry Davis, with a score of 70, and a tie for fourth between senior Dylan Fox and sophomore Ester Choi. Junior golfer Ryan South reflected, “We all putted really well and are feeling really good about our win.”

All players on the Midlo Golf team feel proud of their accomplishment and look forward to States, which will take place on October 9th at Williamsburg National Golf Course. The team anticipates facing tough competition, including the competitive Blacksburg High. They hope to pull together as a team and conquer the State Tournament.

Coach Pruitt expresses his excitement for the tournament, sharing,”I’m looking forward to the chance to win a State Championship for our school.”

Good luck to Midlo Golf as they advance to States!