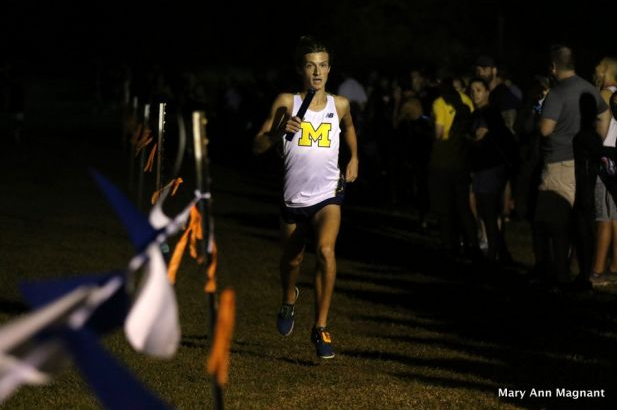 Senior Max Etka anchors for Midlo and prepares for a strong finish.

On September 22, 2018, Midlo’s Cross Country team competed in a race like no other. The RVA Relays embody all aspects of cross country, such as speed, determination, and, most importantly, teamwork. Regardless of the pure agony the runners underwent, every participant and spectator left bearing a wide smile and carrying a head full of unforgettable memories.

Every relay team includes five runners, each running a 2500 meter leg. This challenges the traditional base of cross country races, which last over 5000 meters and test runners’ endurance and will; the RVA Relays require runners to possess speed throughout half of the traditional distance. Runners rarely get the opportunity to run shorter distances, making the RVA Relays a difficult and interesting competition for all.

Midlo’s top boys relay included: Brian Tavenner, Ian Gray, Andrew Steenkamer, Joey Maguire, and Max Etka. Tavenner led off with a powerful first leg, placing the rest of his team in a great position to capitalize. Next, Gray took to the line and ran an impressive leg, followed by strong performances from Steenkamer and Maguire. As Etka, the anchor leg, approached the exchange zone, a feeling of anxiousness and excitement wafted throughout the stands. Immediately after he received the baton, Etka propelled himself and his teammates to a speedy fifth-place finish. After the race, Tavenner explains, “Running through the lights at night was such a new and wonderful experience. Also, my team did a really good job, and we had a great race.”

Midlo’s top girls relay consisted of: Caroline Bowe, Lena Caffall, Chloe Martin, Katherine Krievs, and Annabel Schepker. The girls took to the line, preparing to perform in an exciting and much-awaited race. One of Midlo’s most impressive young talents, Bowe, broke off an explosive first leg, setting the mood for incredible performances from each of her teammates. Next, Caffall entered the exchange corral and ran a speedy leg, followed by Martin, who helped her team advance ever further. Then, Krievs stepped to the line and ran an incredible fourth leg. Finally, as Schepker toed the line, she powered her team through, finishing in a respectable eleventh place. Junior Annabel Schepker remarks, “It was thrilling to run in the dark with only lights to see the way and try to chase down the people in front of me.”

At the RVA Relays, Midlo boys and girls proved their talent among the best runners in the state.