Class of 2022 Officer Speeches and Election 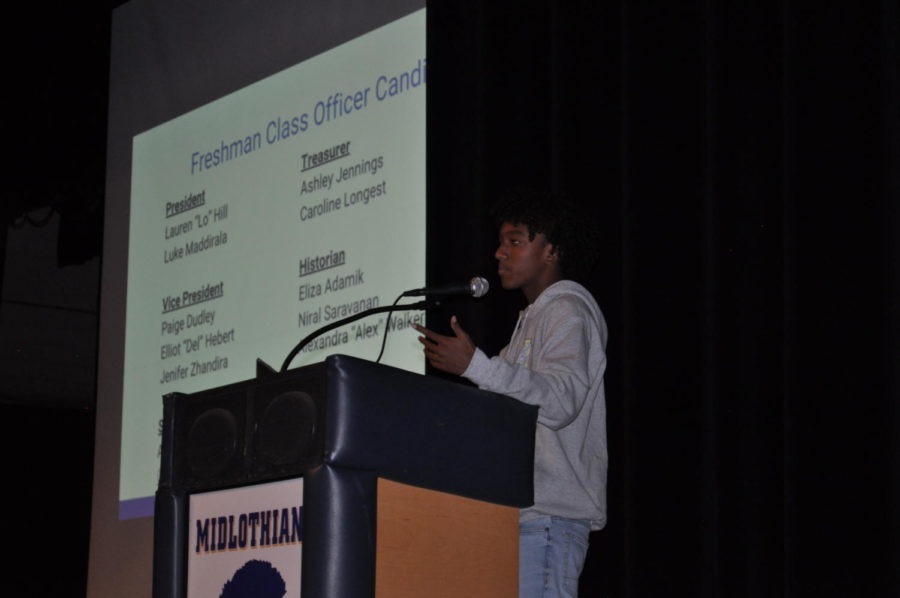 On Monday, September 24, 2018, the freshman class gathered in the auditorium during Midlo Morning for a presentation from their peers. Hopeful future freshman class officers put their most professional faces forward as they spoke to their entire class about why they should vote them for their respective positions. Giving a speech in front of a large audience is an extremely difficult task, especially for freshmen who aren’t quite familiar with the school and their new classmates yet, but the candidates handled the task with poise.

Lauren Hill brought some enthusiasm to the auditorium on Monday with a giant “HELLO MIDLO,” to kick off the speeches. She aims to become the new Freshmen Class President, and plans to enact “innovative changes and positive solutions.” The competition for president is doubled up with Luke Maddirala, who hopes, if elected, to “make everyone feel as comfortable as possible this year.” He claims that “a president who can help is a president who can lead.”

Paige Dudley kicked off the speeches for the vice presidency with a passionate speech, referencing her goals to “unite the freshmen class” and “create a community for us in this school.” Next up, Elliot Hebert spoke for the role of vice presidency, stressing the ideas of inclusiveness. To add, Jennifer Zhandira spoke for this position as well, claiming her goal to be a “friendly face for new students and a defender for those already here.”

Next up, the Historians gave a snapshot of their goals by speaking to the class. Eliza Adamik began the speeches for this position, sharing her goal to recognize inclusiveness in pictures. Following Eliza, Niral Saravanan delivered his speech promising to make freshman year “an incredible experience documented by photographs.” To close the Historian speeches, Alexandra Walker shared her goal to make this year “the easiest high school transition” and her plans to create a “Freshmen Fun Day” in an attempt to get freshmen to mingle with each other.

Abby Busick started the speeches for the position of Secretary by sharing her goals to keep an updated social media and to listen to other students’ concerns/ideas. Unfortunately, Connor Long could not be there to present his speech, but still delivered a video sharing his goals for the year.

Ashley Jennings began the speeches for Treasurer, claiming to “build involvement by finding community service that people connected to.” Caroline Longest also spoke for this position, sharing her idea to create a haunted house at Midlo as a fundraiser.