Students Cheer for Blue and Gold 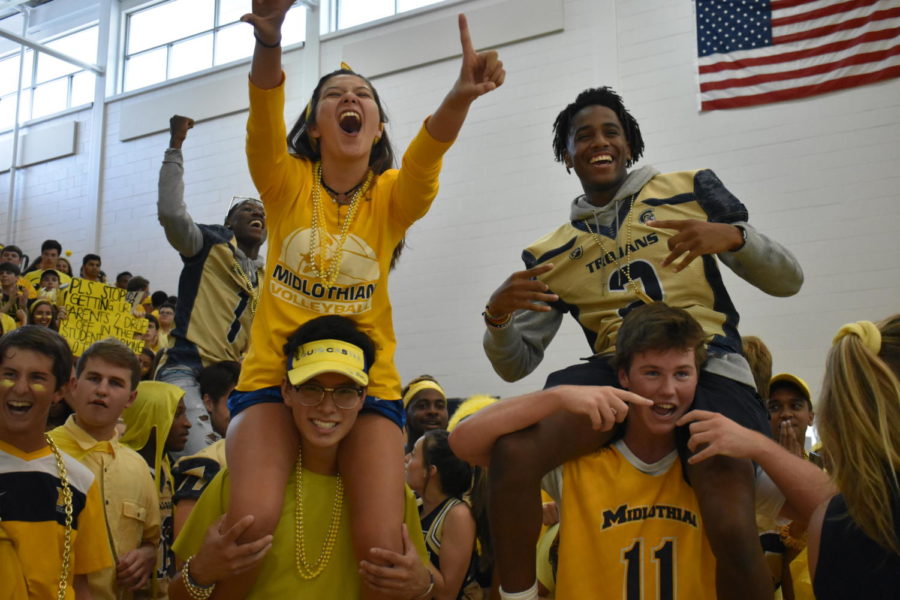 Terry Lee lifts Taylor Chung as Liam Wasson does the same for Jacoby Martin in celebration of their first pep rally win as seniors.

Nothing welcomes back  students and faculty like a good Midlo-style pep rally. On Friday, September 7, 2018, Midlo hosted its first pep rally of the 2018-2019 school year. Midlothian High School students poured into the hallways with excitement, as they looked forward to celebrating another iconic pep rally.  Freshmen and juniors rocked all different hues of blue, while sophomores and seniors sparkled in golden garb. Despite the different colors, all of the students experienced a similar struggle to stay in their seats, as they awaited the announcement that released them to secure the best pep rally spots within the first few rows in the gym.

To kick off the pep rally, the fall sports teams entered the gym full of enthusiasm, as the crowd hyped the teams with roaring applause and loud cheers.  The students felt especially excited during the arrival of the varsity football team, who played L.C. Bird later that day. Along with football, Midlo’s field hockey, cross country, wrestling, golf, and volleyball teams stormed the court as well.

Following the arrival of the sports teams, the different classes participated in games to earn points towards winning the pep rally. For their first game, they ran a relay with a unique twist in which they dressed in football gear while they ran. The freshmen took the gold in this game, giving them a new sense of energy for the remainder of the event. After the football relay race, the students participated in a balloon popping game, during which they tied balloons to their ankles and attempted to pop the competing class’ balloon. In the final match, the juniors played against the seniors, and the seniors popped every junior balloon except for Mary Hettinger’s, who put up a tough fight, as the last junior standing before the seniors ultimately won.

The pep rally came to an end with the infamous “VICTORY” cheer and a few other spirit competitions, and finally,  the  pep rally committee announced the results, determining the new keeper of the spirit stick. The freshmen came in fourth, the sophomores earned third, the juniors came extremely close in second, and the seniors emerged as the pep rally champs. Senior Class President Sujeet Alwin exclaims, “It was the best and most energizing pep rally I’ve ever been to,” capping off an excellent first week of school.