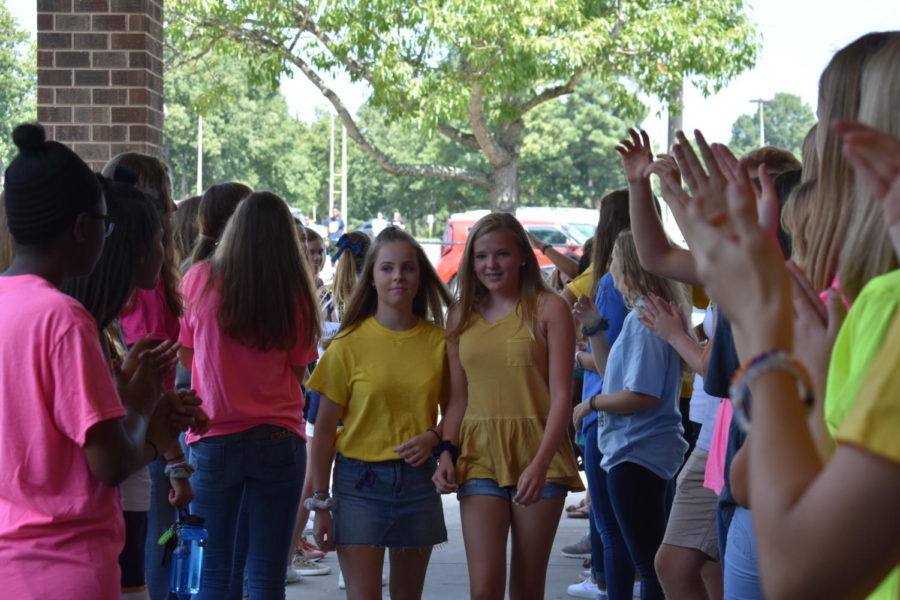 Incoming freshmen enter the school through a tunnel of Trojan Nations students to attend Freshman Orientation.

On August 30, 2018, the Trojan Nations freshman orientation extravaganza kicked off the 2018-2019 school year. The fun-filled spectacular began as returning students, accompanied by the Midlo Drumline Squad, cheerleaders, and Trojanettes, whooped and hollered while the new freshmen and transfer students anxiously entered the gym. Trojan Nations Council and Sidekicks donned multi-colored shirts that read “Trojan Nations,” while freshmen sported navy blue shirts emblazoned with “Rise Up!” in gold lettering.  A feeling of excitement settled throughout the gym, as five hundred freshmen prepared to enter the best years of their lives.

Following a brief message from Trojan Nations Coordinator Mrs. Denise Bowes, freshmen teamed up with their assigned Council and Sidekicks and walked to the auditorium to listen to guest speaker Shaun Derik, who began the assembly by describing his own hardships, highlighting the childhood, home, academic, and social challenges he faced. Despite these obstacles, he became a piano aficionado, possessing the rare ability to play without sheet music. Additionally, he reminded students to always believe in others and explained the concept of individuality within a group. During the presentation, students and teachers clapped in unison, creating a melodic beat, to which four students competed in a spirited dance-off. As he concluded his powerful message, Derik encouraged all students to embrace their uniqueness and shine brightly.

Shortly after Derik’s speech, Council and Sidekicks led groups of freshmen on a tour of Midlothian High School. As the guides pointed out each of Midlo’s amenities, the new students seemed impressed and excited to embark on their four-year journey through high school. Following the tour, a lively pep rally commenced with the incoming freshmen and transfer students. Led by the Midlo cheerleaders, the new students cheered loud and proud, learning the “V-I-C-T-O-R-Y!” and the Blue and Gold cheers. During the pep rally, the Midlo Trojanettes performed to the rhythmic beats of the Midlo Drumline Squad, which further hyped up the crowd. Bringing all of the festivities to a sweet ending, students and staff enjoyed cold popsicles, which provided a refreshing reprieve from the blazing hot gym.

Midlo’s Council and Sidekicks proved particularly helpful, providing a great deal of information to the new students. Freshman Nicole Quiram described the Trojan Nations students as “super nice and funny,” while Madeline DuBois said, “They helped me to learn my way around the school, as well as get rid of some of my nerves.” Trojan Nations Council and Sidekicks will continue to support the freshmen throughout the first semester using lesson plans created by Mrs. Tully’s Service Learning students. While the new students entered Midlo as timid strangers, they left as part of the close-knit Midlo family.