Midlo Says Farewell to Class of 2018 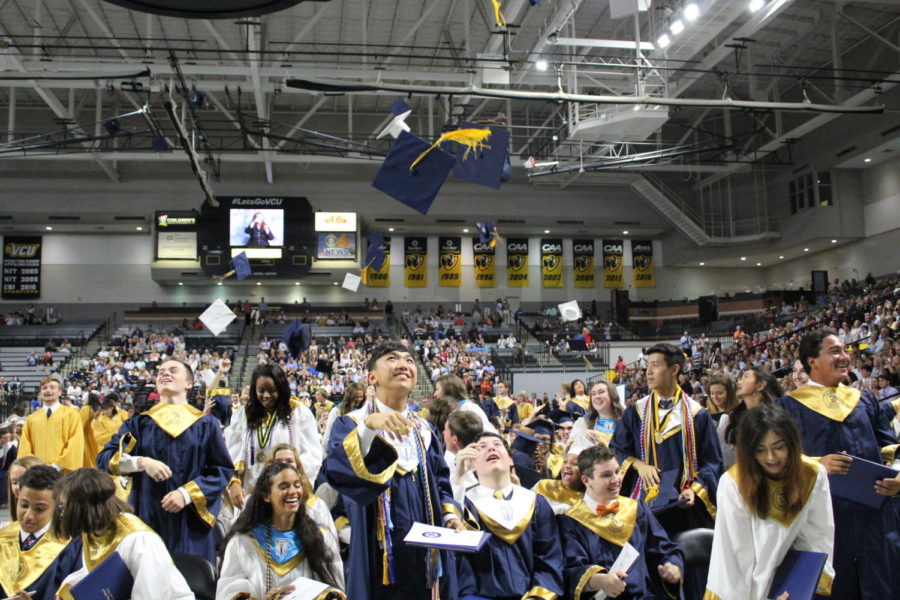 On Friday, June 8, 2018,  at the VCU Siegel Center, the Class of 2018 donned their caps and gowns and prepared to say goodbye to Midlo and hello to the future.  As parents and guests streamed in and found seats for graduation, the seniors patiently waited in the wings, spending the extra time to enjoy their friends. At 7:00 pm, the Class of 2018, directed by class sponsors Mrs. Carolyn Manheim and Mr. Chris Eliot, confidently entered the Siegel Center to Pomp and Circumstance, beautifully executed by the Midlothian High School Trojan Band, conducted by Mr. Taylor Fletcher.

After the seniors took their seats, Class President Kenny Harbula welcomed everyone and introduced Monacan High School Honor Guard to present the colors, followed by the Pledge of Allegiance and the National Anthem, performed by Midlo’s choral students, under the direction of Mrs. Michelle Graham, which took on special significance due to Mrs. Graham’s retirement this year.

Mrs. Leslie Haley, a member of the Chesterfield County Board of Supervisors, and Dr. Javaid Siddiqi of the Chesterfield County School Board, both offered words of inspiration to the Class of 2018, before yielding the podium to CCPS Interim Superintendent, Mr. Rusty Fairheart, who presented two graduates, Noah Dorman and Jade Durant, with the honor of the Superintendent’s Award, and Dr. Siddiqi assisted by handing them each $1,000 scholarships and Superintendent’s Award medals.

Following Dr. Fairheart, Valedictorian Katie Daniluk likened the Class of 2018’s journey to an hourglass. With a reference to the long-running daytime drama, Days of Our Lives, Daniluk advised that time moves so slowly at first, but like the sands of an hourglass, it has moved quickly as graduation approached. She advised her peers to never stop self-reflection and a quest to improve. Next, Margaret Weinhold discussed navigating life’s journey, using the extended metaphor of a map.  As she concluded her speech, she advised graduates to “embrace the uncertainty and any fear you have of getting lost, for in the end, you will have learned so much more than when you first began.” Finally, International Baccalaureate senior Devin McCombs gave his classmates a pep talk about the future, including the wise words of Oogway the Turtle from Kung Fu Panda: “Yesterday is history; tomorrow is a mystery, but today is a gift. That is why it is called the present.” He advised the graduates to open their presents and enjoy life.

Midlothian’s choral students performed a breathtaking rendition of The Road Home, by Stephen Paulus, followed by words of wisdom from Principal Shawn Abel, who used a nod to the crowd pleasing Lin Manuel Miranda musical, 21 Chump Street to energize the graduates. Next, Assistant Principal Robert Gifford announced the Top Ten scholars from the Class of 2018 (listed below), who came to the stage to receive medals, as recognition of their hard work and dedication to academics.

The main event soon followed, as Assistant Principal Denise Bowes began announcing the graduates to receive their diplomas and shake hands with dignitaries.  After many smiles and cheers, the final, radiant graduate from the Class of 2018, Zachary John Zezza, crossed the stage to accept his diploma.  Amid celebration and cap throwing, Principal Abel declared the members of the Class of 2018 as official graduates of Midlothian High School. The band performed Brahm’s Finale, as the dignitaries, faculty, and graduates left the floor.  As part of a beloved Midlothian tradition, the faculty formed two lines, through which the graduates of the Class of 2018 paraded as they left the Siegel Center floor to receive hugs, smiles, and well wishes.

Parents and friends anxiously gathered outside the Siegel Center to greet their seniors and take pictures. The chaotic scene was punctuated by the beat of the street drummers nearby, as the Class of 2018 relished the moment and closed one chapter of their lives before opening another. Congratulations and Good Luck, Class of 2018!

Midlo Class of 2018, Go forth and conquer your dreams. We’re proud of you.