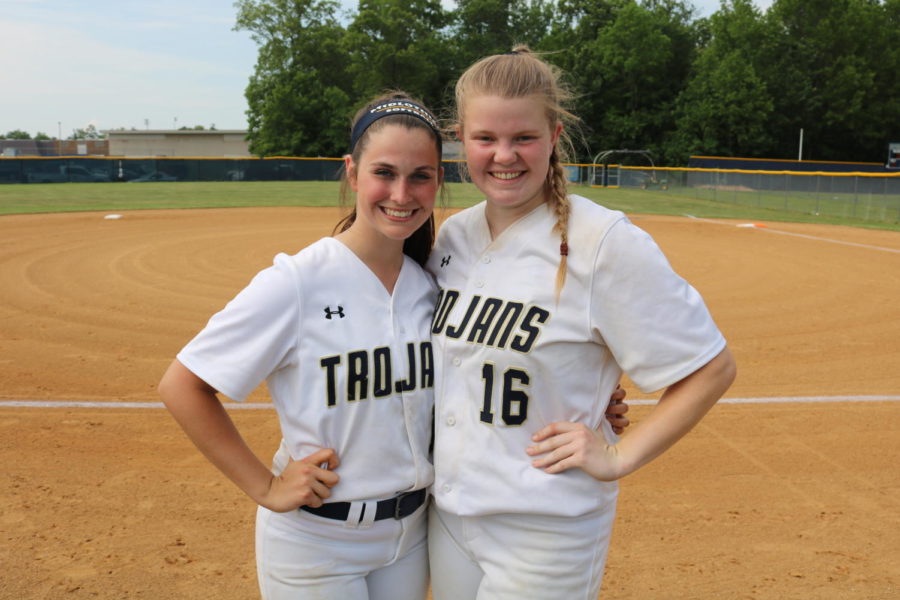 Haley Young and Morgan Gilbert smile for pictures on their senior night.

On Tuesday, May 14, 2018, the Midlothian Trojans varsity softball team joined under a stunning pink and orange sunset to commemorate the outstanding careers of seniors Haley Young and Morgan Gilbert. These two incredible athletes have meant so much to the program over the last four years, not only as talented players on the field, but also as leaders off the field. The Midlothian softball program has boasted winning seasons in each of the last two years and sent many young athletes on their way to compete at the collegiate level. The Lady Trojans ended the season with a record of 14-10-1 and more importantly an entire season full of great memories and lasting friends. In an emotional close to the season, just before the last home game of the regular season, two of Midlo’s greatest softball players began to say goodbye to one of the most unforgettable chapters in their lives.

Although tears began to swell in players’ and parents’ eyes, there remained an electrifying season finale to be played. In a down to the wire finish, the Lady Trojans lost a heartbreaking game against the Manchester Lancers. By a score of 7 to 6, the Lancers squeaked out a win against the Trojans, who left the bases loaded in the bottom of the 7th to end the game. Midlo jumped out to an early 2 run lead in the bottom of the first off an RBI single from Young and a wild pitch that got past the Lancer’s catcher, allowing Gilbert to score from third. The Lancers answered in the second with two runs of their own off Midlo’s starting pitcher Abby White. From there, the action action only got better, as Midlo and Manchester went back and forth, trading punches until the bottom of the 7th rolled around with Midlo down a run and looking to end the season with a comeback victory for the ages. Abby Campbell, Maggie McDermott and Lauren Lingel all reached base, setting the stage for senior Haley Young to bring home the win in dramatic fashion. Memories of legend Derek Jeter’s final at bat undoubtedly flashed through the minds of die hard fans, as Young approached the plate with two outs away, the game-winning run waiting in scoring position. Young looked at two balls to begin the at bat, then fouled away the next two, running the count even at 2-2. What came next was a filthy rise ball that Young fought hard to stay on top of, but couldn’t quite get there, as the ball went soaring into the outfield, landing square in the center fielder’s glove to end the game.

After the the game, the girls celebrated a fantastic season, refusing to let one disappointing end sour an overall amazing night. Young even found solace in knowing her teammates have her back, saying “This isn’t how we wanted the season to end, but I’m not going to forget how much fun it was just because of one at bat.”  It takes incredible courage and mental toughness to shake off a tough loss, but for Young and the Trojans team as a whole, there is certainly no shortage of courage. Overall, the Lady Trojans enjoyed a great end to the regular season and celebrated the remarkable close to two of Midlo’s finest athletes.