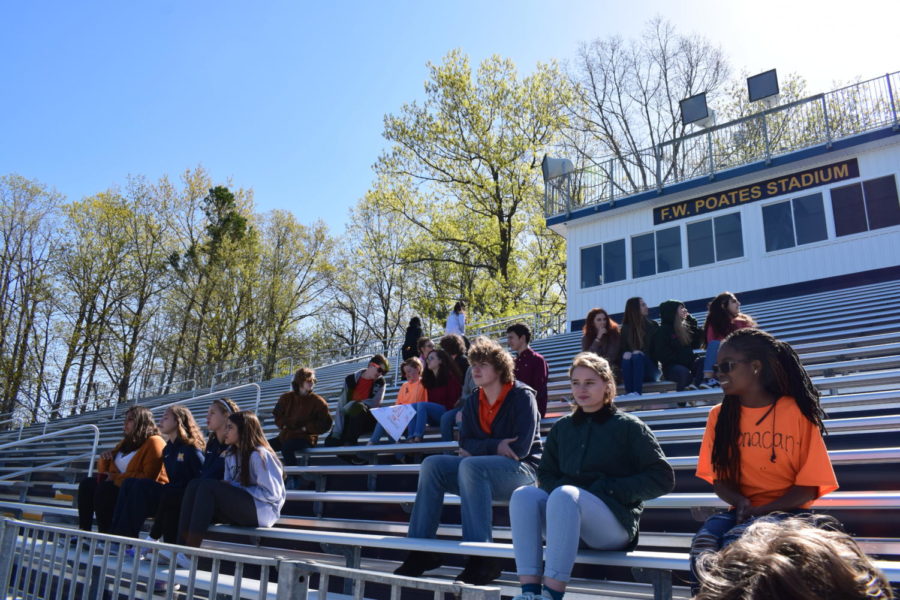 Midlo students gather on the bleachers to listen intently as sophomore Emily Muncie shares opening remarks at the April 20 walkout.

On April 20, 1999, the tragedy that occurred at Columbine High School in Littleton, Colorado, shocked the nation. On Friday, April 20, 2018, marking the nineteenth anniversary of the tragedy, students nationwide rose from their seats at 10 AM and walked out of their classes to remember those who lost their lives to gun violence. They chose that day to walk out to convey solidarity with gun violence survivors and to display determination to end gun violence. Midlo sophomore leaders, John Williams, Presley Green, Hope York, and Paige Advocate-Ross, led the small group of Midlo students that marched out to the football field. From there, they sat on the bleachers, leading chants and listening to speakers. Their walkout lasted from 10 AM until the end of the school day. Sporting orange, students across the nation walked out of school. Why orange? In 2013, 15 year old Hadiya Pendleton was gunned down due to a case of mistaken identity in a Chicago park. To honor her memory and spark activism, her parents chose orange as a call for gun reform.

The survivors of the Parkland shooting spearheaded the walkouts. Since the shooting on February 14th that killed seventeen, students of Marjory Stoneman Douglas have worked to ensure that another tragedy like the one that occurred on Valentine’s Day does not happen again. A group of students from Parkland founded the March for Our Lives movement, which pushes for gun control. On March 14th, one month after the Marjory Stoneman Douglas shootings, students across the nation walked out of their classes for 17 minutes to commemorate each of the lives lost that day. On April 20th, the March For Our Lives movement organized a second school walkout to focus on the Columbine High School shooting.

Over 2,600 walkouts took place on Friday. In Richmond, demonstrators traveled to Brown’s Island at noon, and from there, they marched to the State Capitol. However, students at Midlothian High School decided to host their own separate event. The first speaker, sophomore Emily Muncie shared, “Do you want to be on the side that made a change or the side that sat back?” Soon after, the bleachers fell silent as speakers read the name of each person who was murdered at Columbine, followed by a minute of silence. Those remembered were: Cassie Bernall, Steven Curnow, Corey DePooter, Kelly Fleming, Matthew Kechter, Daniel Mauser, Daniel Rohrbough, Rachel Scott, Mr. William “Dave” Sanders, Isaiah Shoels, John Tomlin, Lauren Townsend, and Kyle Velasquez..

Presley Green took the microphone to share her own terrifying experience with gun violence at school. “I lived in North Carolina in 7th grade, and it was just a normal day at school,” she began. “It was third period when my best friend and I asked to go work in the hallway. As we were working, we saw a guy walking down the hallway. He was acting very suspicious. That was when my best friend said, ‘Maybe we should go back inside the classroom.’ But before I could respond, we both saw him drop something. We both knew right away what it was. We ran back to classroom, but he starting to run, and picked up the gun. On that day, myself and my classmates almost became another statistic on a page. And from that day, it changed my life forever.” As the crowd cheered, she added, “Some say that we will never make a change. Well, look around you. We are the change.” Other students, including sophomores Mallie Schneider, Jozie Perry, and Nour Goulmamine, shared their own speeches with the crowd.

Although the walkout ended at 10:30 for many, some students stayed outside for the rest of the school day, willingly accepting the consequences. “I want to thank Presley Green, Paige Advocate-Ross, John D. Williams, and Hope York for putting in the work to give us the opportunity to peacefully protest for our safety,” said Jozie Perry.