Seniors Engage in a Trojan War Against Faculty 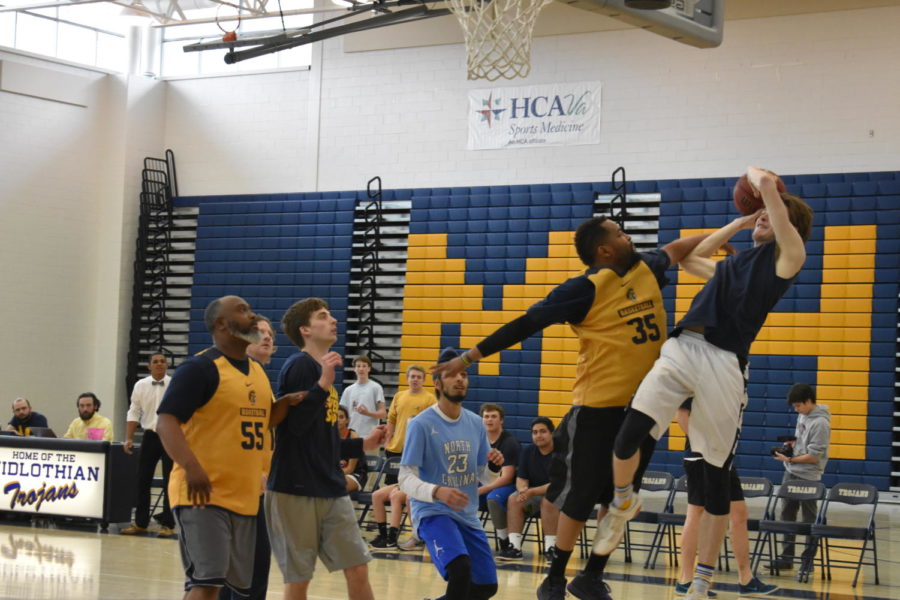 Mr. Erby attempts to block a shot by Adam Wajciechowski.

On March 30, 2018, the last school day before Spring Break, students grew rowdy and excitable for the annual Senior-Faculty Basketball Game, organized by the senior class officers. Once the clock struck 12:50, students flooded the main gym bleachers to watch players of both teams practice and warm up. Energy and spirits rose as warm up songs, like Get’cha Head in the Game, Basketball, and Seven Nation Army hyped up both players and the audience. Senior player Eva Johnson reported during the warm up that she was “so excited and so pumped,” and she expected her team to win. Faculty coach Mr. Biedenharn disagreed, feeling “very confident” about the game and expected it to be “a very easy win because we have so much team unity”.

After the warm up and practice time, players and coaches stood at the sidelines, and the audience rose during John El-Jor and Christina Ju’s performance of The Star-Spangled Banner. Then, Mr. Johnson, the faculty announcer, introduced Coach Biedenharn’s faculty team, followed by Coach Justin Penn’s senior team.

In the first quarter, the Seniors struggled to put points up on the scoreboard with several failed shots and failed fast break passes. However, Coach Biedenharn subbed in Mr. Brohl and quickly caused turnovers, thus, the faculty finally scored the first points in the game late into the quarter. Switching to all girl players in the second quarter, the intensity of the game finally made an appearance. With Kaylee Rathbun and Eva Johnson making long passes advancing toward their basket, the seniors seemed to have a chance. Ms. Crerie stole the ball back for the faculty, and shortly after, she made her shot, making the faculty even stronger. Seniors reciprocated immediately, as Kendall Bernard and Alexis Kelley both made quick easy shots, bringing the game to a tie. Ending the quarter, Ms. Crerie made another appearance, successfully putting her free shot into the basket. At half-time, as the faculty led 5-4, senior coach Justin Penn paced the sidelines and shared that he felt “a little worried but confident that [the team] can pull together”.

Senior singer and member of Midlothian’s Just For Show, Trevor Christmas, performed a cover of Ed Sheeran’s Thinking Out Loud for the half-time show. Students in the audience swayed and danced to the slow ballad. Following the performance, Mr. Johnson announced the winners of the door prizes, as senior officers pulled raffle tickets out of a beach bucket. Two students won Amazon Echo Dots, and two students won one-pound bags of candy.

Tensions rose and anxiety built as the second half of the game approached. Both teams grew in intensity and drive to win the game. Mr. Erby stole the ball and scored in the first ten seconds of the quarter. Dilpreet Jaswal responded by scoring immediately with a lay-up. Erby was not playing around,  and he scored two more times in the quarter with a three pointer. Arman Nassar and Kendall Bernard worked hard to bring the seniors back into the lead by successfully scoring points. However, Mr. Brohl ended the quarter with a buzzer beater of a three pointer. In the fourth quarter, Arman Nassar broke ankles and shook the gymnasium with a three pointer. With beautiful shots from Mr. Brohl, Mr. Callaham, Dilpreet Jaswal, and Adam Wajcieclowski, the score was 22-21 at the last 40 seconds of the game. Ben Hammond ran the ball down the court as time ticked down, and as the end of the game and a possible victory for the seniors approached. Mr. Callaham played great defense, got in front of the basket, and took Hammond from under his feet, destroying all possibilities of the seniors winning the game.

The an ecstatic faculty reveled in their 22-21 win.

Although the seniors felt crushed by the loss, their spirits quickly lifted at the sweet promises of Spring Break and graduation.