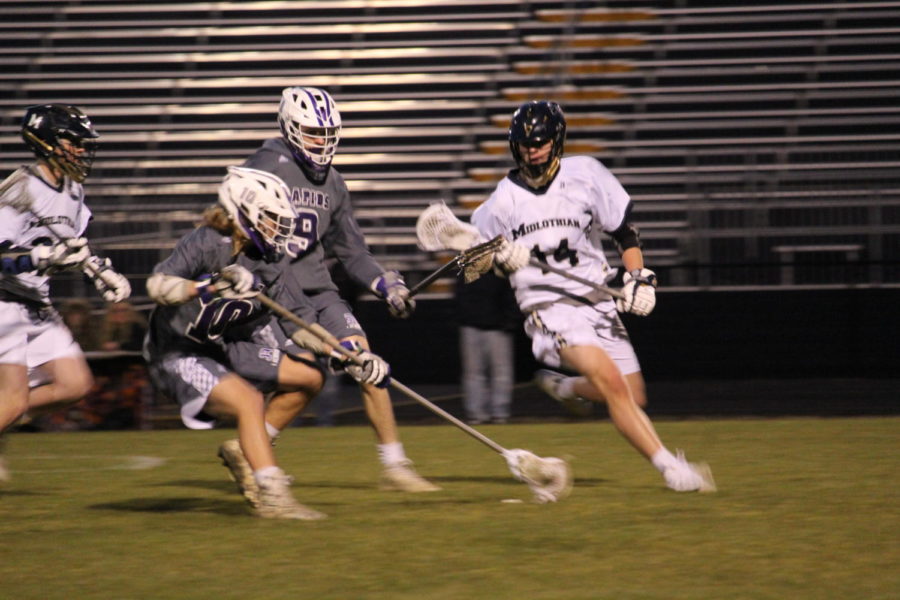 On Monday March 26, 2018, a lacrosse rivalry four years in the making saw its final battle play out on Midlo’s Poates Field: Midlo vs. James River. Both Midlo and James River’s senior classes have stoked this rivalry for the last four years, building tension to a point of extreme aggression and physicality, but most importantly, an unwavering determination to win. With the sunset falling on the players’ backs and temperatures creeping below the 50s, adrenaline and testosterone surged to an all-time high in preparation of the game many of these players have envisioned since freshman year. One of the most talented and dedicated athletes in Midlo’s lacrosse history, David Foster, set the stage for a epic match-up, calling the rivalry game “A whole different animal” and adding, “There’s just so much more intensity and desire to win.”

Midlo began the game with a display of genius ball movement and precision passing, leading to number 4 Will Sayegh with an open look at the cage, burying a top shelf laser to put Midlo up one. Beginning with number 3 Trevor Christmas at the top of the attack area, the ball swung around the left side of the field, dragging the defense with it, until number 7 Sterling Mason whipped the ball cross field behind the cage, granting Sayegh his 1v1 with the goaltender. Just two minutes later, Midlo scored again, but this time Bryson Miller took matters into his own hands, catching an in-stride pass from Trevor Christmas 20 yards from the cage and sending a sidearm rocket past the goaltender’s knees, extending Midlo’s lead to two. Later in the second quarter, Midlo began to lay it on the Rapids, as number 12 Zach Harriman scored a tough goal to notch the game at 3-0. Sayegh launched a shot just off the mark, ricocheting to Harriman, who, all in one fluid motion, scooped up the ball and slung an overhand shot past the Rapid’s defense and into the back of the net. The onslaught continued, as number 14 Derek Christmas found the back of the net as well, thanks to a sneaky feed from number 17 Will Pomeroy and a quick turn and strike.

Despite Midlo’s red hot start to the game, the first half concluded at a score of 5-2. The second half proved mainly to be a defensive battle with numbers 18 and 20 David Foster leading the way for Midlo. Eventually, the Trojans were able to hold on for a great 9-5 victory over their arch-rivals, the Rapids. To sum up the team’s feelings after the win, Scrimpsher described the post-game atmosphere as “awesome” also saying, “beating River is one of my favorite activities”. This win will go down as one of Midlo’s finest on the year and certainly one each senior will never forget.