Orchestra, Band, Color Guard, and Dance Team Take Trip of a Lifetime to the Bahamas 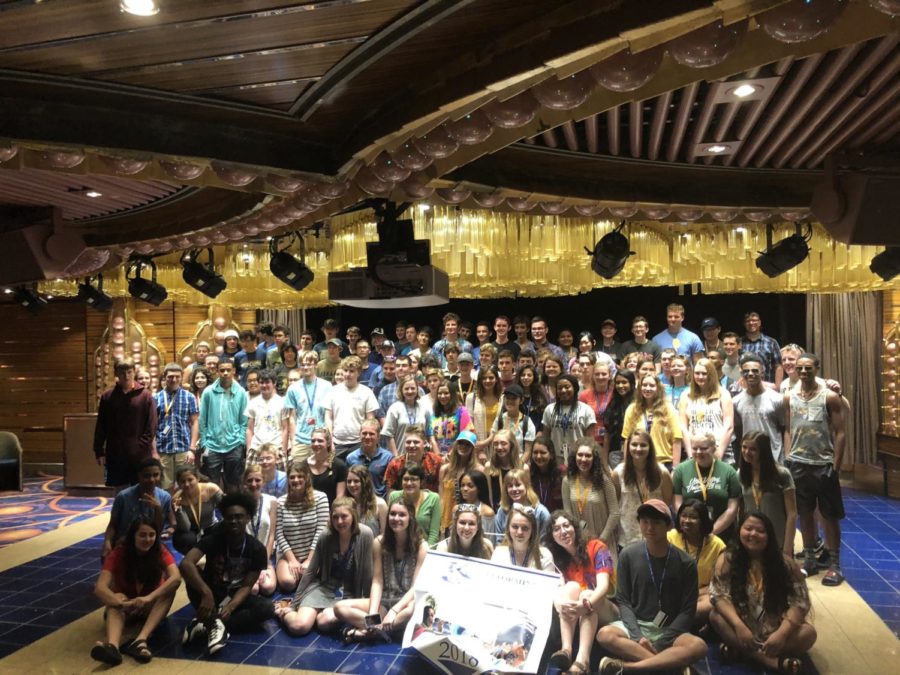 Midlothian musical students all combine together, as they represent Virginia on the cruise ship.

At midnight on March 28, 2018, Midlo’s orchestra, band, color guard, and dance team, joined together to travel to the Bahamas by cruise. Students’ excitement grew as Principal Shawn Abel, Mr. Gordon Rawls, and Mr. Taylor Fletcher,  loaded the charter buses ready for the fourteen hour drive to the Jacksonville, Florida, port. All  three of the Midlo buses zoomed off into the night to catch up with the Manchester and James River High buses, who met in Pooler, Georgia, in the morning.

Arriving in Jacksonville, Florida, on Thursday March 28th, after a long, strenuous bus ride, the students caught their first glimpse of their home for the next few days, a beautiful Carnival cruise ship. All of the students ran off the buses, right into the 80 degree Florida weather and security checkpoints. Cruise passengers were subject to a security check and met with an employee to activate their cruise cards, which served as each passenger’s ID for the duration of the cruise. After completing a few housekeeping items,  Midlo, Manchester, and James River students boarded the ship with their bathing suits in hand.

As soon as the large groups of 300 musical students boarded, they scattered to explore the ship, including the theater, restaurants, shops, and entertainment areas. Passengers felt a large rumble, as the ship’s motor underneath shook, signalling the cruise leaving port and initiating its way to the Bahamas. Thursday was filled with exploration and adaptation to living on a boat, while all passengers settled in their tiny state rooms. Following the fun of the first day, the late dinner came around, for which participants dressed in their best clothes. Freshman Rachel Smith described the food in the restaurants as “some of the best food [she] has ever tried and [added] that it was fun to see all her peers dressed up.” Every night, the waiters and waitresses gave all the passengers a show of dancing and singing.  Students then headed back to their rooms for needed rest after their long journey, skipping the fun nightlife activities for that night.

When Friday morning came along, orchestra students pilled out of their rooms for an early morning practice, preparing for their performance on Sunday afternoon. Mr. Fletcher was the amazing conductor in charge of leading the combined orchestra. After rehearsal, the rest of the students joined the orchestra to enjoy a mouth-watering breakfast buffet, filled with a plethora of  pastry goodness and steaming pancakes. While eating, a loud voice belonging to the captain of the ship flooded into the room, informing the passengers that the Carnival ship had arrived at its first destination: Freeport, Bahamas. Students frolicked on the ship until the 1 pm call time to unload.

Band students prepared to play at this beautiful destination for all of the locals to enjoy. Conductors Sarah Harkness and Kimmy Wrobel started the performance for the eager audience. Manchester, James River, and Midlo’s combined band played classic pop songs, such as: Pompeii and Shut Up and Dance, as well as the marching band warm up. After the performance, applause from Freeport residents and the rest of the Chesterfield group filled  the steaming air. Students then roamed the famous Freeport straw market, where locals display their craftsmanship and sell Bahamas memorabilia. Senior Sarah Harkness described the excursion as “a fun way to see how the Bahamas functions on tourism and independent markets.” After the long day at Freeport, students shuffled back onto the ship, ready to engage in new adventures that the next day would bring.

Exhausted after the previous days’ shopping and adventuring, the Chesterfield musical students were awoken the next morning by the vibration of the ship hitting the dock. Students rushed to docks to watch as the large ship docked at the Nassau, Bahamas, port. All students met as a group to easily depart the ship as one big unit. Chaperones lined up their assigned students, sunscreen, and cameras, to prepare themselves for a long day out on the beautiful beaches of Nassau. After stepping off the ship, everyone boarded a taxi boat that would take the students across the bright blue waters. Afterward, the taxi boat pulled up to an astonishing private beach, with tropical restaurants and talented dolphins performing tricks for an audience.

The minute the students’ feet touched the soft sand, they threw off their clothes to reveal bathing suits and ran into the warm water. They filled with volleyball playing, beach relaxing, and yummy foods. However, the time came when the taxi boat pulled up to pick up the Chesterfield group. Every person boarding the boat felt reluctant to return, wanting to stay on the Nassau beach forever. As the taxi boat moved toward its destination, the sounds of dancing and singing to the Soca Boys hit, Follow The Leader, filled the air.  Beach-soaked students hopped off of the taxi, thanked the joyful captains, and headed to do some shopping in the Nassau port before returning to the Carnival ship. Time passed quickly, as chaperones escorted everyone back onto the ship, and students readied themselves for the fanciest night of dinner, for which passengers dressed in their best clothes. They enjoyed a dinner fit for royalty.

The final day, Sunday, rolled around, and students planned to make the most of it, spending the day enjoying the seas and taking advantage of the entertainment that the large ship had to offer. Throughout the day, students ran around participating in the ship-wide Easter egg contest to try and find twelve golden eggs. Others lounged around the pool or spent all day around the 24 hour buffet or ice cream machine. In the afternoon, orchestra students suited up in black to entertain passengers in the large theater. The performance went smoothly, as audience members enjoyed the fun classics, such as: My Heart Will Go On, Under the Sea, Vortex, Bossa Rojo, and Can’t Help Falling in Love. The last day had passed quickly, and after their last meal on the ship, the Chesterfield students joined the dinner staff in dancing and singing, as well as wishing them farewell.

By Monday, the students had packed their luggage and prepared to board the charter buses. The group reunited with their drivers and took off in the steaming Florida weather, embarking on one last journey, the long fourteen hour bus ride back to Midlo High. Sophomore Liza Hopper explained that she was “sad that their cruise was over but was excited that they were able to enjoy each other’s company for fourteen more hours.”

Over the five day tropical adventure, Midlo, James River, and Manchester students bonded over endless frozen yogurt, pizza, and fun. The Bahamas will always have a place in the students’ hearts, as they will remember their special time together for the rest of their lives. Principal Shawn Abel joked, “sunshine, music, and 25o students, what could go wrong?” Everyone who participated counted themselves lucky to have such a fun experience of bonding and learning on the cruise.