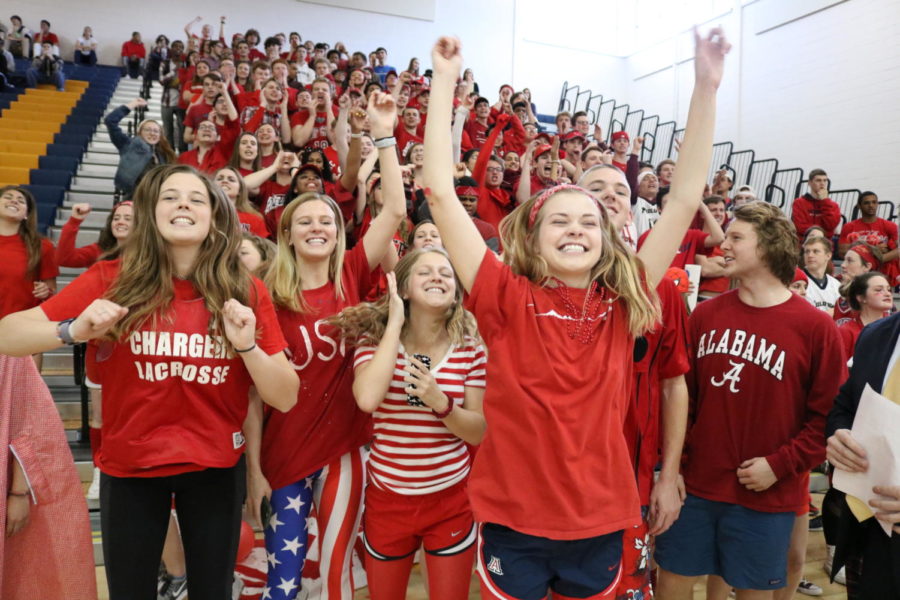 The seniors cheer for their class at the Spring Pep Rally.

The sounds of excitement, anticipation, and the possibility of a bit of friendly rivalry filled the air, as students filed into the Midlothian High School gym on March 23, 2018, as the Spring Pep Rally kicked off around 1:00 pm. The freshmen burst in with a pop of blue, the sophomores soared in with their white attire, the juniors intimidated the other classes in their black clothes, and the seniors showed their superiority in classic red.

To kick off the pep rally, the classes participated in a banner competition in honor of Midlo’s hard working employees. The sophomores won this competition with their sign praising the cafeteria staff, which read: Lettuce tell you how grape you are.  Following the competition, the energetic entrance of the track, lacrosse, tennis, softball, baseball, and soccer teams enthused the crowd, drawing cheers that reverberated from the gym walls. Sophomore Mckenna Fecht remarks, “It was so much fun to get to experience a real pep rally since I’m on the dance team, and I never got to attend one regularly.” Drew Mayo and Emily Smith agree when describing their last pep rally as: “extraordinary.” Christian Chamber recently transferred to Midlo from Monacan High School and exclaims, “Midlo’s pep rallies are even better than everyone described them to be.”.

After the enthusiastic entrance of Midlo’s athletes, Mrs. Randrianasolo’s and Mrs. Carlson’s classes wowed the classes with an impressive Tae Kwon Do presentation. Next up, Midlo’s Winter Guard made their first pep rally appearance to the song, Can’t Stop the Feeling. The first game of the pep rally, Crab Soccer, kicked off right after the performance, and the sophomores took the gold in this competition with a winning team of Erin Junkmann, Sarah Aud, Claire Mosher, Tegan Lee, Ben Scott, Ryan South, Carson Parrish, and Kyle Gaunt. Then, four students from each class gathered onto the court to participate in a Spring Sports Relay Race that featured aspects of each spring sport. The sophomores dominated this competition as well, using the skills of Olivia Clarke, Katie Gaeth, Hunter Neff, and Zach Harriman to lead them to victory.

Last but not least, the pep rally reached an end with the traditional victory cheer. After the cheer, the students waited in anticipation as the judges decided the winner of the final pep rally of the 2017-2018 school year. The freshmen came in 4th; the seniors shocked the other classes when they placed 3rd (ending their winning streak); the sophomores placed 2nd; and the juniors won, achieving their first win as a class under class president Sujeet Alwin.

The last pep rally of the school year was one that Midlo students will not soon forget, and the freshmen, sophomores, and juniors can’t wait to meet back in the Midlo gym next year to battle it out again.