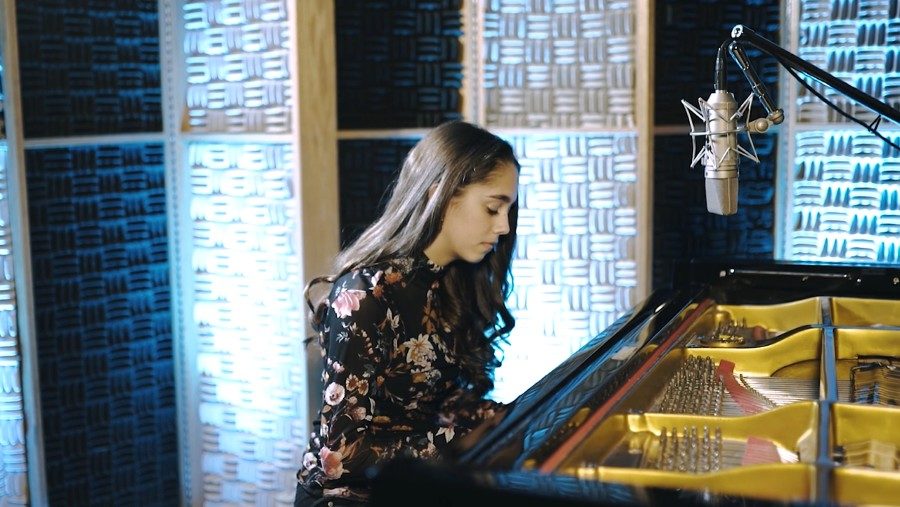 Sophia Nadder sings a cover of "You Are the Reason" on vimeo.

Midlo sophomore Sophia Nadder has loved singing for the entirety of her life. At the age of nine, she started singing seriously at talent shows and at several sport events, including: numerous VCU basketball games, as well as Flying Squirrels and Washington Nationals baseball games. She has released multiple covers in the past, including some now available on vimeo, such as You Are the Reason.

At the tender age of 11, Nadder sang the National Anthem at Virginia’s 72nd Governor Terry McAuliffe’s inauguration, as well as at the Wizards vs. Pacers game during the 2014 NBA playoffs. She has sung at a variety of sports events in venues such as: Richmond International Raceway, The Diamond, Capital One Arena, and Nationals Park. On Friday, February 2, 2018, Nadder sang the National Anthem at the VCU basketball game against Rhode Island and received thunderous approval. She often performs at events per the request of Anthem organizers on staff, who have seen her previous performances.  Currently, she plans to sing God Bless America for a NASCAR event and the National Anthem at the Flying Squirrels game on the 4th of July. Even though she has performed many times at a variety of locations, she says that she doesn’t “really have a favorite because each one has been unique. There are so many things [she] has done that [she] would not have even imagined before [she] got the chance to sing for them.”

Music inspires Nadder, as do many well known artists whom she considers her role models, such as: Elvis Presley, Bruno Mars, Adele, Sia, and Andrea Bocelli. As well as booking performances around the city, she also performs at Midlothian High School in the Performing Arts program. In addition to roles in Les Miserables and You’re a Good Man, Charlie Brown, she is a member of Midlo’s all-girl a capella group, Pitch Perfect, enjoys choir as a music elective, and takes vocal lessons and music theory lessons outside of school. Besides learning in her music theory and vocal classes, she teaches herself how to play different songs on the piano and on the guitar. She uses the knowledge she has gained from her music classes to help her figure out how to arrange them without having to look up the chords online.  Of her choice of choir as her musical elective, she says it is “the best class [she] has ever taken. [She] has learned so much, not only in music, but in team building, problem solving, and all kinds of other important life lessons.”.

Not only is Nadder musically inclined, but so is her family, including her cousins, who also are current or former Midlo students: John and Danielle El-Jor. She says, “John and Danielle have definitely had an impact on my music. They are both so inspirational, and I can’t thank them enough for how they have helped me with my music in my first years of high school.” Her parents also are both music lovers. Her dad first introduced her to Elvis Presley at a young age, as well as helping her to explore other artists and genres. Her mom loves to help her pick out music to perform at events when she does not sing the National Anthem.  Clearly, music is in Sophia Nadder’s blood, and she shares her passion with all who have the good fortune of hearing her voice.

What advice do you have for people who want to sing seriously?

“It might sound cheesy, but just keep working towards it. It definitely gets hard or frustrating sometimes, but I have been through the struggles, and I have really grown because I keep putting work into it and don’t give up. Don’t be afraid to step out of your comfort zone. Explore different styles and artists because you might find that you like a genre you never thought you would. For example, my voice teacher introduced me to Italian Arias, and now they are one of my favorite styles to sing.”

Do you plan to pursue singing as a career? Do you have a specific college in mind?

“Singing is absolutely my passion, but I am not sure I want to study it full time because I feel like if that is the only thing I am focused on or always forced to study, I might get bored or lose interest in it. I also want to explore and study different things besides music in college, so I have a backup. I haven’t decided on a specific college I want to attend, but I have looked into James Madison University, Christopher Newport University, and Berklee [College of Music] in New York.”

Do you ever plan to audition for a music competition show?

“I have previously thought about it, but I decided I would not want to participate in one, at least not while I am still in school. I want to finish my education and still have the chance to have the same high school and college experiences as everyone else my age.”