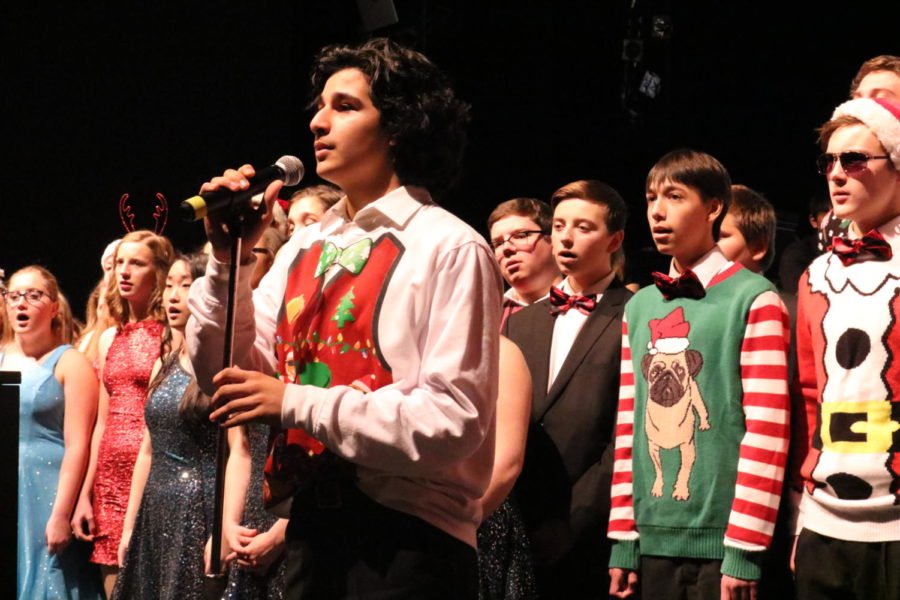 John El-Jor beautifully performs his solo in "Believe" with the Rhythmic Drive and Pitch Perfect.

On Thursday, December 7, 2017, during second period, Midlothian High School’s band, orchestra, and chorus students eagerly waited, while the student body piled into the school’s auditorium for two back-to-back assemblies. Dressed for the holiday spirit, chorus students wore their best holiday sweaters and socks, while orchestra and band students showed off their excitement as they decorated their instruments with tinsel, wrapping paper, and lights. Every student who walked into the auditorium immediately got into the holiday mood, not a scrooge to be seen.

As faculty and students took their seats, Mistress of Ceremonies Jade Durant welcomed them and set the tone for the event. First to perform was Midlo Metal, performing The Hammer, followed closely by the Guitar Ensemble’s rendition of Carol of the Bells. The sheer number of guitars playing in unison delighted the audience.

Trojan Jazz Ensemble performed Spain, followed a lively rendition of Carol of the Bells, sung with enthusiasm by Just for Show and Chamber Ensemble. Vocal Ensemble then sang Tomorrow Shall Be My Dancing Day, followed by City Lights, who had audience members swaying to Here We Come A-Caroling.

Trojan Band took the spotlight to perform a masterful rendition of Cantique de Noel, and then the student a capella groups came down to the front to pick up the pace. Pitch Perfect delivered a feisty version of Santa Tell Me, with solos from Jade Durant and Brooke Ward, followed by a soulful performance of White Christmas by Rhythmic Drive, with solos by James Pridgen and Garrett Redden, and then both groups combined to sing Believe from Polar Express with lovely solos from John El-Jor and Christina Ju.

The Midlothian High School Orchestra took the spotlight next, and Jinwoo Kim on electric guitar stole the show, as the orchestra played a moving rendition of Christmas Eve/Sarajevo, conducted by Mr. Taylor Fletcher. Just for Show followed with Silent Night, and then the Trojan Band and the Midlo Orchestra played the traditional Sleigh Ride to the  two packed assemblies.

The Trojan Band, Midlo Orchestra and the entire chorus joined at the end of the show to perform Festival Sanctus and then invited faculty to join them for the Hallelujah Chorus.

In addition to the two school assemblies, the music department played an additional show in the afternoon and a full concert that evening. As usual, Mrs. Michelle Graham, Mr. Gordon Rawls, and Mr. Taylor Fletcher put on a tremendous show, utilizing the talents of their students to delight audiences and fill the auditorium with holiday cheer.