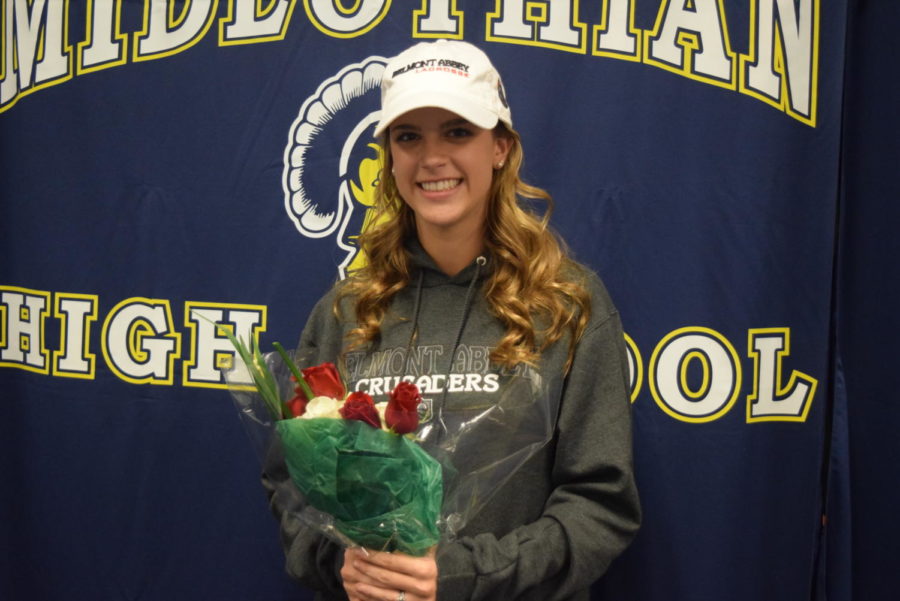 Katie Call will play lacrosse at Belmont Abbey next year.

On high school sports teams, countless athletes dream of pursuing the sport they love in college. On November 20, 2017, Senior Katie Call recently made this dream a reality by signing to play lacrosse for Belmont Abbey College.

Held in the Midlothian High School library, the National Letter of Intent (NLI) Signing Ceremony was much anticipated by Katie and her family.  Her parents, her sister Kylie, and her grandparents came to support her, along with some of her coaches, including Midlo lacrosse coach, Devoe Reagan and Midlo field hockey coach, Geri Douglass. Call arrived sporting a Crusaders sweatshirt and signed with her parents by her side.

Katie Call started lacrosse during her eighth grade year and continued the sport throughout high school, playing both for Midlo and for Storm, a lacrosse club based in Richmond. Call knew for certain she wanted to play in college during the middle of her junior year. During that time, while competing in Maryland, she heard that the Belmont Abbey coach was interested in adding her to the team. After talking on the phone with her, Katie soon eagerly decided to become a Crusader.

With the understanding of devotion necessary to make it to the college level, Call’s advice to others is to “work hard and get out there and practice every day.” She also explains that “college coaches look for all types of players, so there’s a place for everyone to play.”