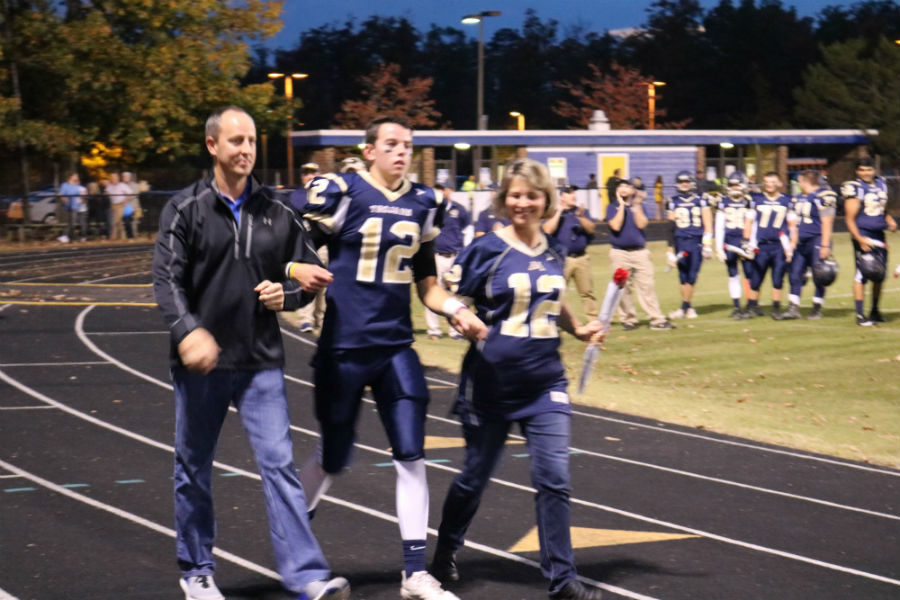 Senior quarterback Kyle Daniluk is escorted by his parents on Senior Night.

On Friday, November 3rd, the seniors on the Midlothian football team showed their appreciation for their teachers before their big senior night.  Each senior on the team asked their most influential teacher to wear their jersey throughout the day on Friday.  All players on the team also addressed certificates signed by the students and the Coach Matt Hutchings, to show their appreciation.

On the night of November 3rd, the Midlothian Trojans took on the James River Rapids at F.W. Poates Stadium. Senior football players, managers, cheerleaders, dance team members, and marching band members were announced and walked around the track with their parents, as they prepared for their final regular season game.  The student section glowed in gold, ready for Senior Night and the big game, the annual Coal Bowl.  The players also glowed in brand-new gold jerseys, given to them as a surprise to be worn for the Coal Bowl.

During halftime of the intense game, Principal Shawn Abel made an announcement regarding the retirement of Athletic Director David Cooper.  Abel thanked Cooper “for [his] four years of commitment and dedication to not only Midlothian Football but to our Midlothian Community.”  All of Midlo will miss Cooper and everything that he has done for Midlo as athletic director for many years.

The game ended with a Trojan loss in a tough fight, 33-48.  The team had a great run this year with a record of 5-5. Along with a memorable and impressive season, the team made the playoffs for the first time in 31 years.  The Midlo football team has made a mark on Midlothian High School as it paves a new path.