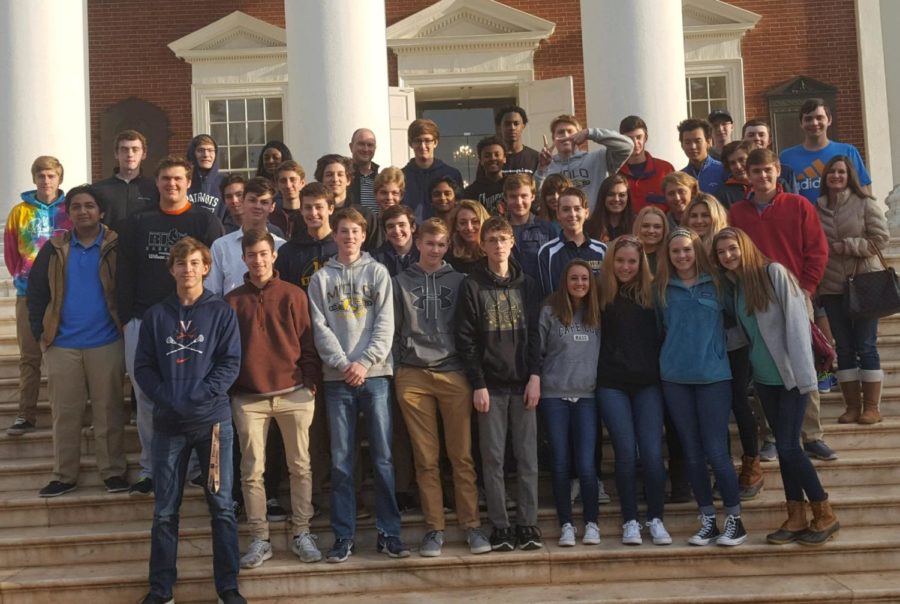 On Wednesday, November 1, 2017, Midlo’s avid business enthusiasts and DECA members traveled to Charlottesville, Virginia, to tour The Lawn, where the best and brightest of the University of Virginia (UVA) students live, as well as the John Paul Jones Arena (JPJ). DECA is a club that focuses on “preparing future leaders and entrepreneurs to be college and career ready,” according to its website. DECA’s slogan, Own your future, encompasses the goal of creating educated and sophisticated young business men and women. The energy on the bus ride over to UVA was palpable, as the students chatted about their excitement to see UVA, the basketball arena, and go to Mellow Mushroom for lunch.

As soon as the students arrived in Charlottesville, Malcom Stewart, a Midlothian High School graduate and UVA senior, greeted them and brought the students to his room on The Lawn. As attested by many of his teachers throughout his high school career, Stewart always exemplified the behaviors of an amazing student, leader, and person. According to DECA sponsor, Mrs. Carolyn Manheim, “Malcolm is an inspiration to every student at Midlothian High School. He is bright, motivated, hardworking, and people-oriented.” Not only does Malcolm reside on the prestigious Lawn at UVA, he also is the lawn RA and serves as the senior class president. Stewart brought the students and chaperones, Mrs. Carolyn Manheim, Mr. Steve Hayward, Mr. Timothy King, and Mrs. Jennifer Singer, to his room and also educated everyone on the history of UVA.

Following the visit to the The Lawn. the field-trip participants ventured to John Paul Jones Arena to tour the whole building. Katharine Palmer, assistant director of operations at UVA, led the tour after a short introduction and speech about marketing college athletics from Palmer, as well as the director and assistant director of marketing at JPJ. The students got to walk on the court, sit in the stands, see the practice court and the head coach’s office, as well as visiting many more exciting areas in the building. Sadly, they didn’t have the opportunity to see the locker rooms because they were undergoing renovation, but standing on the court that many of their role models played on definitely made up for that. Sophomore Claire Horansky remarked, “I’m a fan of UVA, and touring JPJ was the highlight of my trip. It was awesome to see coaches on the court working plays. I also loved seeing the head coach’s office; it had a beautifully painted wall. One of the speakers talked to us about their new scoreboard, which was very big and fancy. They said it was one of the nicest and most modern score boards in college basketball, so I really liked getting the opportunity to see that, along with the court, because I have never attended a UVA game.”

Following the tour of the school, the students ate a spectacular lunch at Mellow Mushroom in Charlottesville, and then they shopped at Short Pump Town Center.

This year was the first year DECA traveled to UVA, and the field trip definitely met the students’ expectations. The trip next year will surely attract avid sports-lovers as well.