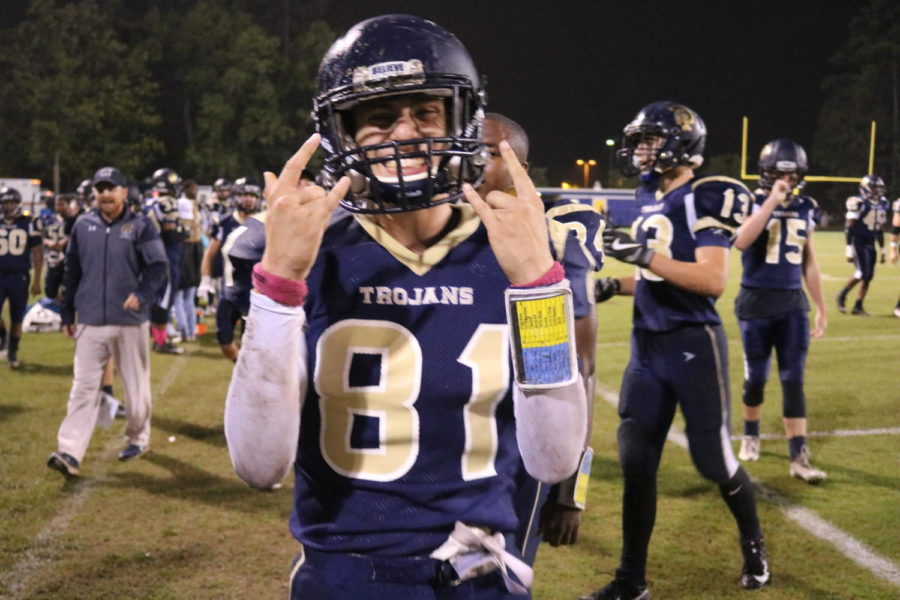 Homecoming fell on Friday the 13th this year, the Clover Hill Cavaliers’ luck ran out.  With a final score of 38-23 the Midlo football team proved that it is firing on all cylinders at just the right time. In all three phases of the game, offense, defense and special teams, Midlo dominated with near perfect execution from the first drive.

Early on the opening drive, Midlo found themselves in a 3rd and 15 hole, only to be dug out by a bullet of a pass from number 12 Kyle Daniluk to number 22 Will Pomeroy.. The drive stalled at the 35 yard line, where facing 4th down and 5, Coach Matt Hutchings elected to leave his offense on the field, passing up a punt opportunity. On 4th down, Clover Hill’s defensive end Nikko Battle came flying off the edge unblocked, generating immediate pressure in the face of Daniluk, forcing him to dump the ball off to number 4 Tyler Pace in the flat. Pace angled his way to the sideline with speed but was wrapped up just inches short of the 1st down, resulting in a turnover on downs.

Despite the incomplete offensive drive, Midlo’s defense came ready to play, led by number 24 John Jennings. On the very first Clover Hill offensive snap, Jennings met the running back at the opening in the line, absolutely crushing him for no gain on the play. Mildo kept up the hard hits and textbook tackling, forcing a three and out on Clover Hill’s first drive. Unfortunately, even good field position could not jump start the offense, as lightning struck twice in the same place when Midlo was unable to convert on 4th and 9 from Clover Hill’s 31 yard line. But on this night, defense proved to be the best offense, and Jennings continued to put together a huge game by forcing a fumble that was recovered by number 81 Kyle Webb. Yet again, Midlo faced 4th and short deep in enemy territory, and credit goes to Coach Hutchings for having faith in his offensive unit by going for it, for a third time in the first quarter. Unlike the two previous attempts, Midlo converted on 4th down keeping the drive alive. What ensued was one of the most brilliant play calls of the season by Hutchings. On 2nd and 10, Pace motioned out of the slot, across the field for a screen pass in the flat, but the pass fell incomplete. During the next play, Midlo lined up in the exact same formation pre-snap, again motioning Pace out of the slot into the flat, but this time, the Clover Hill corner back recognized the play and was fooled into jumping the pass, ignoring his assignment. This left Pomeroy wide open in the seam for Daniluk to hit, completing a 24 yard touchdown pass, marking only the beginning of an incredible offensive showing.

Later in the second quarter, Clover Hill struck back on an impressive individual effort by Clover Hill’s quarterback. Managing to evade the rush while keeping his eyes downfield, number 3 Jahair Brown found number 4 Jaylen Lee deep in the end zone, completing a 30 yard touchdown pass, tying the game at 7 a piece. From this moment on, Midlo slammed the door on Clover Hill, scoring a shocking 31 straight unanswered points. The Midlo offense caught fire, beginning with a two yard touchdown run by number 20 Mac Whitten, and continued through the second quarter with a 31 yard field goal by number 14 Aaron Vardell.

At halftime, the Homecoming Court made their way to the field. Principal Shawn Abel crowned senior Joy Li Homecoming Queen before a roaring crowd. Senior BJ Beckwith had been crowned Homecoming King at the Homecoming Pep Rally.

From the beginning of the second half, Midlo kept up the pressure, forcing yet another three and out, setting up the offense in great field position. Almost instantly, Daniluk and Pomeroy connected for yet another touchdown pass, this time from the one yard line. Later in the third quarter, Daniluk found number 5 Casey Joyce in the back of the end zone extending the lead to 31-7. Even after accumulating a commanding lead, Midlo continued the relentless offensive assault, as Webb carried the ball 54 yards to the house shaking off tackles the whole way. Midlo’s second unit finished the game from this point on, capping one of the most satisfying wins of the season. Midlo looks to carry this momentum into a colossal match-up next week, as the Trojans face off against cross town rivals the Cosby Titans on October 20th on Cosby’s home turf.