Back to the Siegel Center 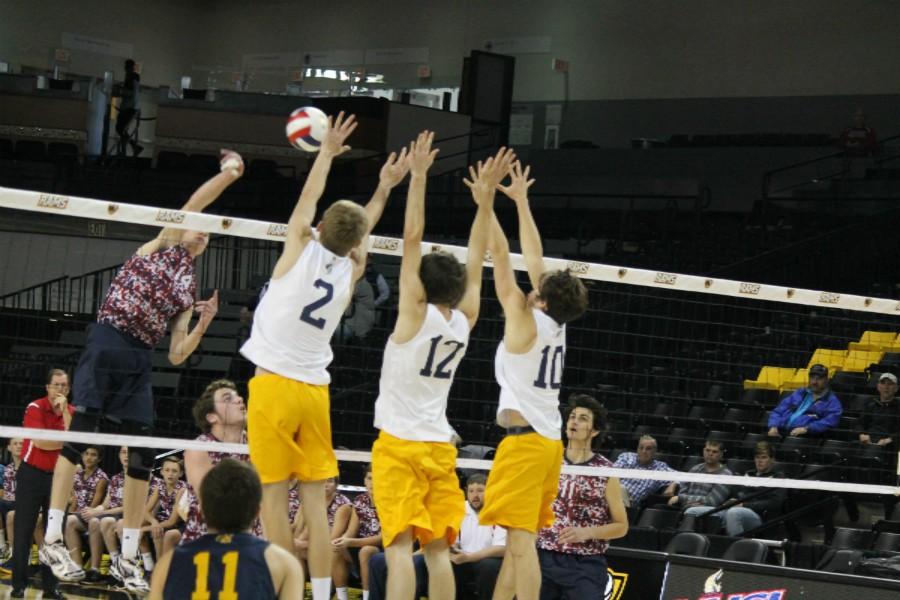 After last year’s win over Hanover in the 4A State Championship, the Midlothian Boys Volleyball team lost three key players, Michael Ball, Mason Cox, and Max Johnson. Despite these losses, Midlothian was not only able to overcome, but able to thrive due to two-time Conference 20 Coach of the Year, Randy Cox. The team completed a stellar season with a final record of twenty-one wins and six losses. This record comes in part from the outstanding play of Nick Spichiger, who earned co-regional player of the year, as well as all-region and all-conference 1st team honors as an outside hitter. Teammate Austin Power earned all-conference 1st team and all-region second team for setting. Matthew Lewandowski received 2nd team all-conference honors, along with Tyler Gregory and Tanner Foglesong, who earned honorable mentions. These Trojans helped lead a truly impressive playoff run.

After Midlothian’s thrilling five set victory against James River on their senior night, Midlothian went on a rampage, beating Maggie Walker 3-0 in the conference semis and defeating Monacan 3-1 to clinch the Conference 20 title. With a 3-0 slaughter against George Wythe in the Regional semifinals, they advanced to the Regional Championship, playing Colonial Heights for the 3rd time this year. The winner of this game would determine the seeding in the State Semifinals. The loser of the game would have to travel to Virginia Beach and play Great Bridge, while the winner would play in their home gym against Churchland.

On November 11th, Midlothian fell 0-3 to Colonial Heights at home in a very disappointing loss, losing by only two points in each set. Despite this tough loss, the team began to refuel and refocus on their ultimate goal: bringing home a second State Championship. Midlothian then had to travel to play Great Bridge in the State Semifinal, winning 3-1 and securing a spot in the State Finals. They returned to the Siegel Center for the third straight year to face emerging rival Colonial Heights in what was sure to be a strongly contested match.

Randy Cox and Mark Lee, head coach of Colonial Heights, have a long history together. It began in 1982 when these two coaches played volleyball together for many years, during which they created a lasting friendship. With such great volleyball experience under their belts, they both decided to begin coaching high school. Coach Cox began coaching at James River for four years, winning two state championships. As his son became a senior and former head coach Jack Speers left, Cox decided to coach at Midlo. Mark Lee, however, has been coaching for Colonial Heights for about 15 years. Coach Randy Cox describes Lee as“a very good guy, a good coach, and most importantly, a very good friend.” They knew they had to put their friendship aside, however, as they played one another in the 4A State Championship.

On Friday, November 20th, the players left school, arriving in Richmond at eleven o’çlock. Once there, they were set to play the Colonial Heights Colonials for the 4th time this season. Soon, the fans started filling in, and the game began with the sportsmanship speech by Tyler Gregory. Colonial Heights quickly set the pace of the game by attacking aggressively and pounding Midlothian’s blocks relentlessly. Star players Nick Spichiger and Noah Murdock went head to head showing off their spiking ability, accumulating 22 and 29 kills respectively. Although Nick and Midlothian played well, it was not enough. Midlo began to fall apart after winning the second set 26-24. With momentum entering the third set, Midlothian was again overpowered by Colonial Heights, losing the set 19-25. With the fourth set looming, the Trojans gained a small lead of 10-6; however, it was not enough. Colonial Heights won the fourth and final set with a score of 21-25, ending Midlothian’s seemingly unstoppable season. Although these Trojans didn’t win, the Midlo family as a whole is still proud of such a phenomenal season.