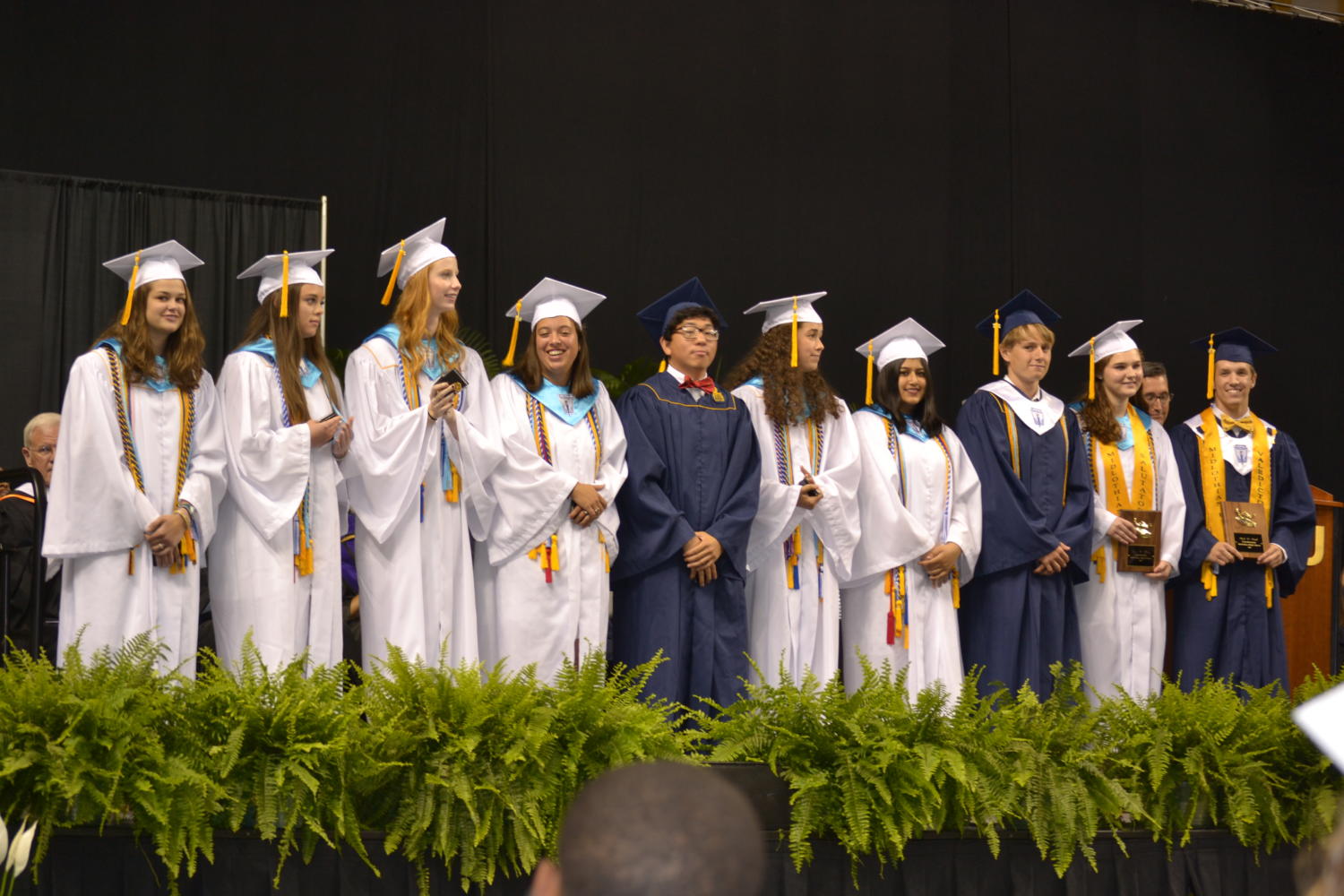 After months of anticipation and weeks of planning and preparing for one of the most important days of their lives, the Midlothian High School Class of 2017’s big day had finally arrived, Graduation Day. On Wednesday, June 7, 2017, at the Siegel Center, the Class of 2017 donned their caps and gowns and prepared to say goodbye to Midlo and hello to their futures.  As parents and guests streamed in and found their seats for graduation, the seniors patiently waited in the wings, spending the extra time to enjoy time with their friends. At 2:30 pm, the Class of 2017, directed by class sponsors Mrs. Carolyn Manheim and Mr. Chris Eliot,  confidently entered the Siegel Center to Pomp and Circumstance, beautifully executed by the Midlothian High School Trojan Band, conducted by Mr. Gordon Rawls.

After the eager seniors marched into the stadium for the first time, wide eyed and ready to walk the stage, they took their seats. Class President Sam Maguire welcomed everyone and introduced the Monacan High School Honor Guard to present the colors, followed by the Pledge of Allegiance and the national anthem, performed by Midlo’s choral students, under the skilled direction of Mrs. Michelle Graham.

Mrs. Leslie Haley, a member of the Chesterfield County Board of Supervisors and Dr. Javaid Siddiqi, Chesterfield County School Board Chair, both offered words of inspiration to the Class of 2017, before yielding the podium to new CCPS Superintendent, Dr. James Lane, who recounted how things have changed since the graduates were born.  Modern conveniences that teenagers take for granted simply didn’t exist then, which makes one ponder how life will be different in eighteen more years. After his thoughtful speech, Dr. Lane, assisted by Dr. Siddiqi, presented two graduates, Evan Arents and Adrienne Preston, with the honor of the Superintendent’s Award, which included $1,000 scholarships and Superintendent’s Award medals.

Following Dr. Lane, Valedictorian Dillon Powell likened the graduates’ daily journeys to experiences learned from Buddy Field Day in elementary school, offering lessons on long-term goals, perseverance, cooperation, and self-reflection. Next, Salutatorian Nora Mulroy offered words of wisdom, based on the poem, Advice from a Tree, by Ilan Shamir, advising her fellow graduates to “stand tall and proud, go out on a limb, remember your roots, be content with your natural beauty, and enjoy the view”.  Finally, International Baccalaureate student Isobel Harrison gave the last of the three student speeches. Delving into the commonplace and the miraculous, Harrison urged her classmates to take the time to notice and appreciate the world around them.

Midlothian’s choral students performed a breathtaking rendition of The Road Home, by Stephen Paulus, followed by Principal Shawn Abel, who used his signature slogan, Go Midlo! to impart words of wisdom to the graduates, as well as giving a nod to the 2016-2017 Midlothian Yearbook’s theme of “one word”. Next, the Top Ten scholars from the Class of 2017 (listed below) came to the stage to receive medals, recognizing their hard work and dedication to academics.

Assistant Principal Robert Gifford then announced the graduates to come to the stage, receive their diplomas, and shake hands with dignitaries.  After many smiles, cheers, and an occasional poorly conceived cheap mustache, the final, radiant graduate from the Class of 2017, Crystal Young, crossed the stage to accept her diploma.  Amid celebration and cap throwing, Principal Abel declared the members of the Class of 2017 as official graduates of Midlothian High School. The band performed Brahm’s Finale, as the dignitaries, faculty, and graduates left the floor. As part of a beloved Midlothian tradition, the faculty formed two lines, through which the graduates of the Class of 2017 paraded after leaving the Siegel Center floor, allowing them to receive hugs, smiles, and well wishes.

Parents and friends anxiously gathered outside the Siegel Center to greet their seniors and take pictures. The persistent beat of the street drummers nearby punctuated the chaotic scene, as the Class of 2017 relished the moment and closed one chapter of their lives before opening another.

Congratulations and Good Luck, Class of 2017!

We will miss you!